NextMobile Schools Fail to Deliver Education in Jammu and Kashmir
Impact in your inbox!
Get updates from India's largest community media network

80 videos on the lack of education facilities in India and counting. Here's why VV thinks a campaign to invigorate the Right to Education Act is necessary As he studied at a night school in Mumbai, Amol Lalzare also juggled several odd jobs during the day tosupport his family. His lifelong dream to complete school was rudely interrupted when in 2006 he had to stop school because of financial constraints in the family. Amol is now a community correspondent and has produced several videos on the challenges faced by people as they try to get through school. For most Indians, getting access to education remains an elusive dream. The further you travel into the interiors of the country, the more severe the problem gets— schools that are too far to walk to; financial constraints; teacher shortages are just some of the obstacles they face. In April 2013, on the 3rd anniversary of the Right to Education Act, the RTE Forum published a report stating that there were 8 million children out of school in India. This year marks the deadline set to meet all the norms set forth in the RTE Act that envisioned equitable, quality education to every child in India. The Act set out ambitious targets that included, a teacher student ratio of 1:30, all weather classrooms, reservation for poor students in private schools and schools within a 3 km radius among others. Though a very positive work of legislation, in its 3 years, the RTE seems to have missed many of the targets set out by it. Many in our network of 130 community correspondents have been documenting the problems their communities face trying to get access to proper education facilities. The collection of over 40 videos (and counting) makes for compelling evidence that the education system in India is far from adequate. [caption id="attachment_3210" align="alignleft" width="300"] 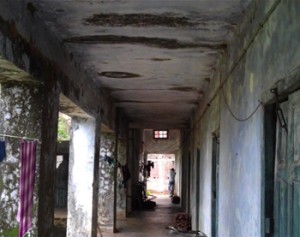 Image: Tribal Boys' Hostel, Jharkhand[/caption] The RTE Forum’s stock taking report found that only 8% schools conform to the standards set out by the act. The shortage of teachers is one of the most urgent concerns that need to be tackled. Our CCs have documented many cases where 1 or 2 dedicated teachers try to run a school but end up being over worked and frustrated. Other basic infrastructure like drinking water and separate toilets for boys and girls are also absent. These two are important factors in retaining students in school. For girls especially, the absence of separate clean toilets presents a hurdle in coming to school. There are also grim revelations from the 2013 Annual Status of Education Report which states that the percentage of children in Government schools who can identify numbers up to 100 has reduced to 50% from the 70% it was four years ago. This decrease in quality has been largely attributed to the Right to Education (RTE) and Continuous Comprehensive Evaluation (CCE) policies that have been implemented since 2010. Over the next few months Video Volunteers will launch a campaign with visual evidence of achievements and shortcomings of the RTE Act. In the first phase of the project, we will aim to cover 100 districts across all states, and more than 100 schools, interviewing more than 100 teachers – and of course, numerous parents and children – seeing how these schools measure up to the 13 key provisions guaranteed by this Act. [caption id="attachment_3211" align="alignleft" width="300"] Image: Children teach themselves in Chhattisgarh[/caption] Trained community journalists, using digital video cameras, will capture the reality of the implementation of the Act. Are schools easy to get to? Is the student-teacher ratio correct? Are there toilets and drinking water in the schools? Are the School Monitoring Committees functioning properly? These, and more are some of the questions we are asking. In the second phase, select Community Correspondents will go deeper into particular stories and case studies, to help us understand WHY the act has worked or not worked in a particular area. And most crucially, to capture what it is like for communities to seek redressal at the block or district level when the act is not being implemented properly.  We hope that in the course of the year enough organisations working on education and government itself will take note of these and ensure that the RTE Act is implemented and all that it envisions is actually implemented.
IndiaUnheard BlogStatesNorth