Next‘Supermen of Malegaon’ – great community cinema in India, all for entertainment
Impact in your inbox!
Get updates from India's largest community media network 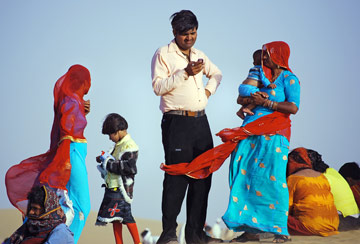 Image from Alamy via the Economist.

Mobile phones also empower communities: citizens are reporting on human-rights violations, coordinating aid projects, and getting the scoop on local politicians. Just this year Indian voters used phones to call up data on their candidates. And Kenyans' mobiles aided them in crisis management by texting to NGOs during post-election violence in 2008.

What's the significance of this for VV? In certain communities, people proficient with their mobile devices are becoming town information specialists, using cheap applications to pull up data on local agriculture and prices, or to google neighbors' questions. They're advising school kids on the endless information now accessible to them. Could CVU producers become "community knowledge workers," using their technical know-how to get information to their communities not only through video, but via mobiles as well?

How else could CVU producers incorporate such rapidfire response tools into their work? Could VV set up an application that allowed community members to message CVUs during a crisis that needed video coverage? The potential seems there.