NextMigrant Labourers Quarantined Without Any Facilities in Madhya Pradesh
Impact in your inbox!
Get updates from India's largest community media network
Community Survey

Amid COVID-19 Second Wave, How are India’s Rural Areas Faring?

The original article was published in The Quint on 12 May 2021 by Rosemary Marandi.  This is a representation.

Rohini Pawar, an Accredited Social Health Activist (ASHA) worker from Pune district’s Purandar block, has never felt as helpless as she has in the last one month since the second wave of the COVID19 pandemic raged through India, causing an unprecedented number of deaths and infections.

Each day starts with requests from people “begging” her to arrange for ventilator beds and oxygen. She has been able to provide leads to many people in the past, but there are some she has to turn down because of the non-availability of beds in hospitals. Just like in many parts of India, the COVID centers around her are already overflowing with infected patients and oxygen has become a scarce commodity.

ASHA workers have been playing a major role in sensitizing communities during this health crisis. One of the key components of their role is to work as an interface between the community and the public health system, but they have gone beyond their call of duty to screen returning migrants workers, conduct contact tracing and to help people access healthcare services.

Pawar has formed a WhatsApp group, connecting doctors, other ASHA workers, and village youth to track LIVE information of availability of oxygen beds in various hospitals on the state’s website and guide infected people accordingly. She is also mobilizing funds and manpower to create a 50-bed COVID center at a school in her village. So far, she has been able to manage 10 such beds.

In her own village, every other home has a COVID positive patient, she says, and quarantining them in a separate room is not an option because houses are small compared to the number of family members.

The nearest COVID center to her village is 15 km away and can only hold 15 patients at a time, but the need has increased to at least 100-200 people per day, Pawar estimates.

“I keep getting calls and requests from people. They tell me: ‘I beg of you, please save our mother, my wife’. I feel bad because we are Asha workers and we promised them we will take care of their health needs. But we can help only up to a certain extent,” she says.

“What do you do when there are no beds; no oxygen; no ventilators? Private hospitals are unaffordable and Remdesivir is being sold for as high as Rs 40,000 per vial”.

Remdesivir injection manufacturers have priced the 10 mg vials in the range of Rs 899-Rs 3,500.

In Jharkhand’s Khunti’s district, the story is no better.

Social worker Rejan Gudia shared that his fellow villagers have begun dreading government hospital ICUs because they believe anyone who goes there during these times, will never return. Such has been the number of deaths in the area.

“Some people, who later died, gave up just when they learnt they were positive. Some of them just did not want to be admitted to a hospital,” says Gudia. “The high number of deaths in these ICUs is probably because of a lack of staff to take care of infected patients and that is making people hesitant,” he adds

Gudia himself tested positive a few weeks back, after two rounds of ‘no report’ from government centres. The third time, he managed to get hold of a private testing kit and found out his status. His entire family is under home quarantine currently and he is on prescribed medication. He is still doing all he can to help people over phone in accessing healthcare facilities and, most importantly, allaying fears.

The State of Rural India

We may never know the actual extent of deaths and infections in rural India, where 70 percent of our people live.

This crisis has drawn attention to this information vacuum, with The New York Times recently writing that “most reports about the collapsing healthcare system are from major Indian cities. We know little about the devastation in rural India, where about 70 percent of India’s 1.3 billion people live and where there are far fewer hospital beds and medical personnel. Federal officials have acknowledged that the pandemic is shifting toward smaller cities and rural areas. People suspect the virus may be worse in rural areas but they don’t know for sure. This crisis draws attention to the information vacuum. People are hungry to know what is happening in the rural areas”.

Well, in the villages, the writing has been on the wall for more than a year. Many rural citizens have long known that nothing was changing in terms of health infrastructure and information in their areas.

In January 2021, Video Volunteers carried out a survey across 136 towns and villages, to assess how prepared these communities were for a major health crisis. As many as 148 of Video Volunteers’ correspondents – including Gudia and Pawar who also work in that role – across 16 states completed the survey. Each correspondent was asked to answer questions based on what they had seen and experienced over the previous nine months of the COVID crisis. They were also asked to carry out research wherever needed to accurately answer each question.

(You can read Video Volunteers’ full analysis of the survey HERE.)

What the Survey Showed

The survey revealed that 46.62 percent of respondents had trouble accessing medical care or medicines during the pandemic (related either to COVID-19 or other, non-COVID health issues), a reminder of how tenuous public health is in rural India. The survey assessed how well the public services in the villages had responded to the crisis, and how prepared they were for the possibility of the situation deteriorating.

In an ideal scenario, the panchayat/municipality would have undertaken activities for health awareness, to cover COVID safety protocols and also to proactively provide information on what the local government was doing to improve public health infrastructure. However, 71.62 percent said the panchayat/municipality had not undertaken any specific activities for health awareness, which can be considered a dereliction of duty. 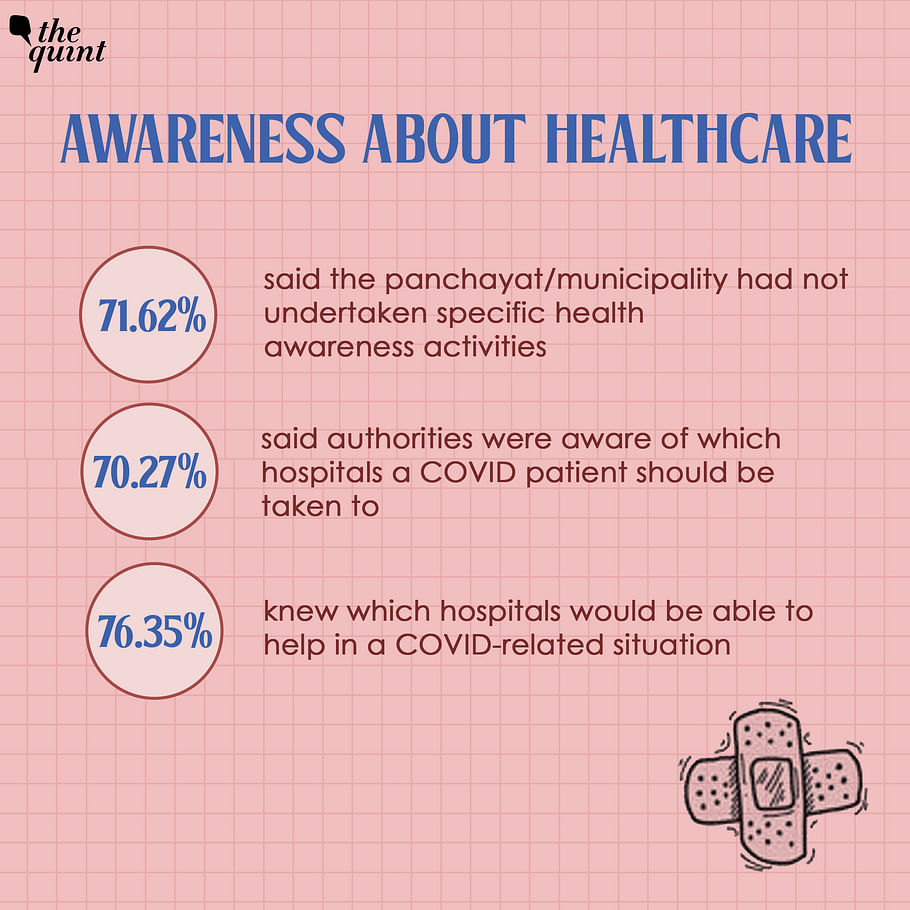 Around 70.27 percent of respondents said the authorities were aware of which hospitals a COVID patient should be transported to in a COVID-related emergency. Meanwhile, 76.35 percent of the respondents themselves knew which hospitals would be able to help, suggesting a decent degree of awareness of where to go for treatment in such a situation.

As many as 31 of the 103 people, who responded to the question on how far COVID hospitals were from their areas pointed to an alarming distance of over 30 km (some even as far as 100 km). At these distances, excellent ambulance service is very important: yet only 34 percent said there were more ambulances available.

The survey attempted to ascertain the quality of the most widely available healthcare infrastructure in the respondents’ panchayat/municipalities, the primary healthcare centers, and sub-centers, and whether there appeared to be greater investment/improvements in these. 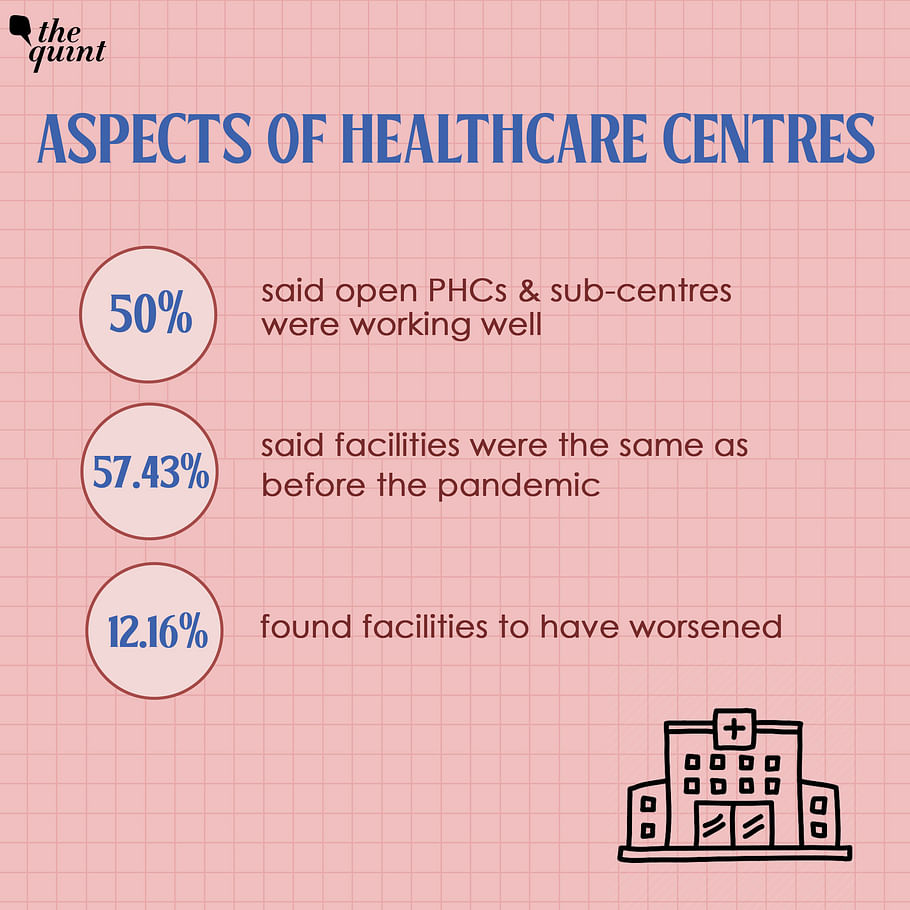 Nearly 52.03 percent of respondents said the healthcare centres in their areas now have COVID testing facilities and are stocked up with adequate masks, gloves and sanitisers (43.92 percent), 50.68 percent people found the building cleaned up. 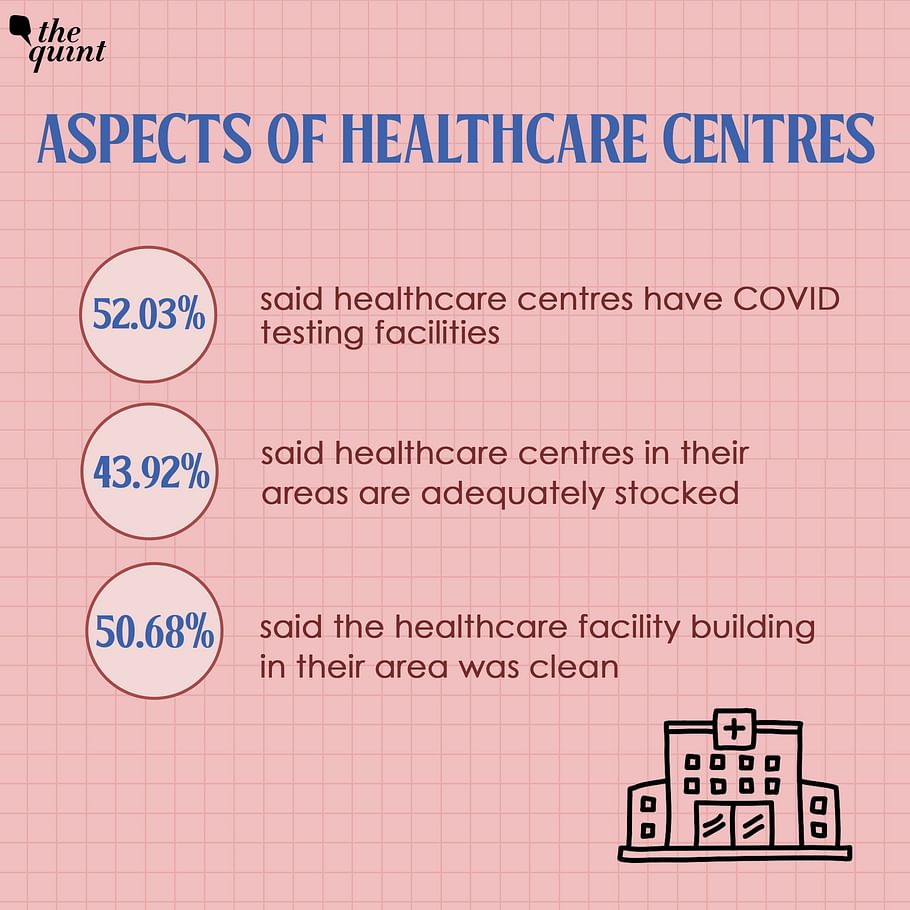 The Video Volunteers’ Community Correspondents who completed the survey also reported that, in their view, the number of doctors and nurses had barely increased in these centers.

Only 8.78 percent respondents observed an increase in doctors, while 12.16 percent said there were more nurses than before, and 14.86 percent said more beds were available at these centres. 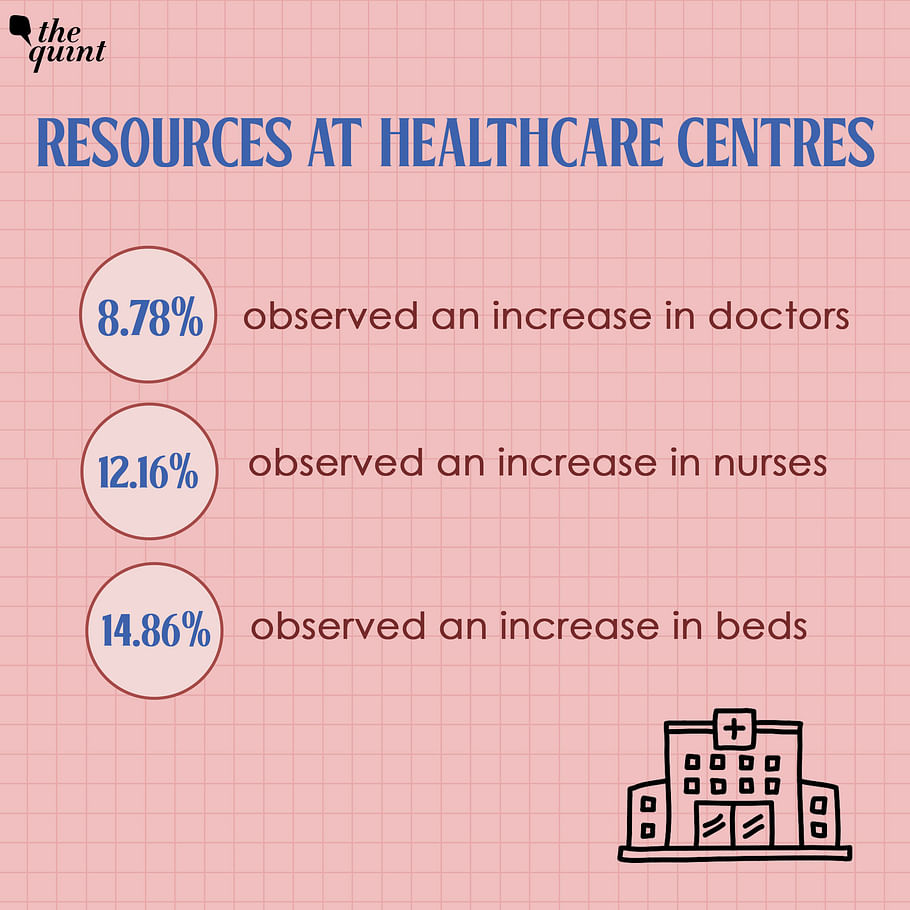 It is interesting to note that when people faced problems accessing medical care or medicines, 72.30 percent did not approach government authorities. As in the case of access to food, people sought help from their community members – Video Volunteers community correspondents, NGO workers, and social movement activists. 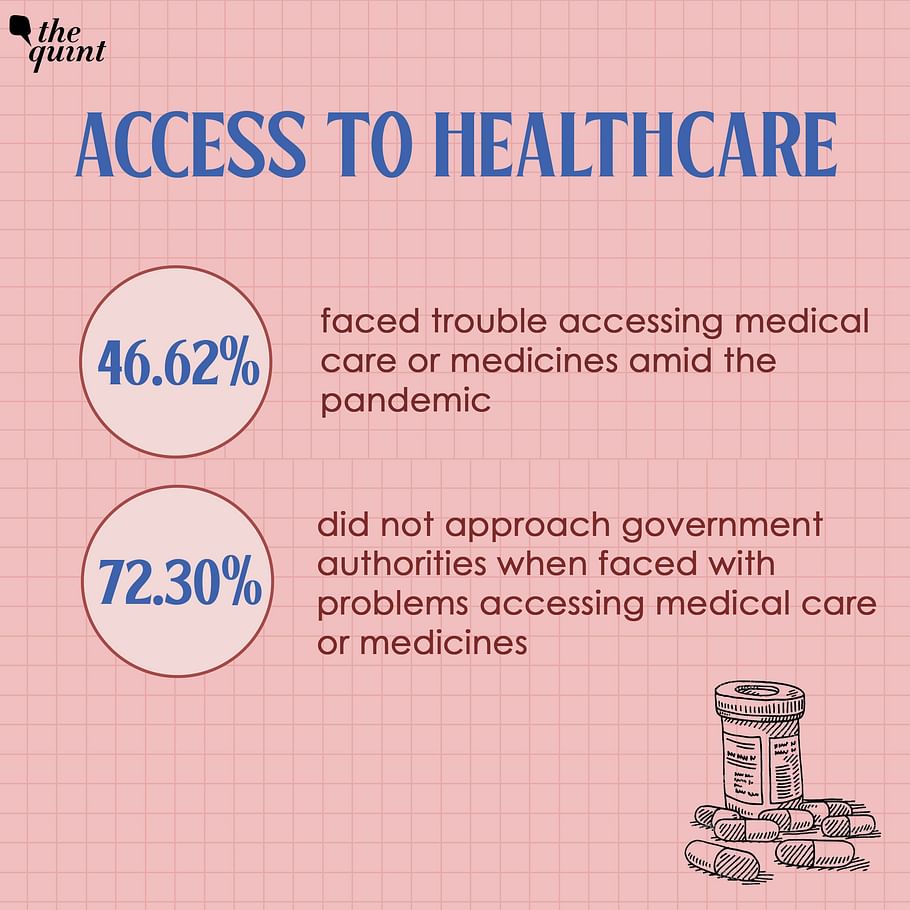 The survey results also reflect the high unpreparedness of PHCs and sub-centers in handling emergency COVID cases, even though these are equipped with testing facilities. It also indicates that the penetration of doctors and nurses in India’s rural areas remains dismally low.

There is little reason to believe much has changed between December and now.

“The idea of this survey was to look at how prepared these rural communities are to deal with COVID at the community level,” said Stalin K, co-founder of Video Volunteers.

“We started by asking: What would a village look like if it were prepared for a disaster or crisis? People would be informed, people would be taking appropriate precautions. If people were very sick, they would be taken care of, and the death rate would not be higher just because they were in a rural area. We also looked at access to hospitals and the availability of ambulances. The data shows there have been some missed opportunities. The government should have used the time of the lockdown to equip hospitals and PHCs.”

Dr Lieve Fransen, a senior advisor to the European Policy Centre on health who reviewed the survey data, reckons that as an immediate step the government needs to upgrade health services quickly in rural areas. Besides, health messages need to go out repeatedly and from trusted sources.

“The right information on public health messages are very simple, but people will only implement them when they come from people whom they trust. that is where ASHA workers, immediate family members, and media have a critical role to play,” she said.

(Rosemary Marandi is a freelance journalist writing for publications such as Al Jazeera, and Nikkei Asia. In order to write this article, Rosemary studied the COVID survey findings for Video Volunteers. This is an opinion piece and the views expressed above are the author’s own. The Quint neither endorses nor is responsible for the same.)

Youngsters from Nashik came together under an organisation and helped revive water sources near their village.

The law sided with the accused who was let off citing lack of evidence.

Even after 7 decades of India becoming a republic,

Thank you for supporting Community Media