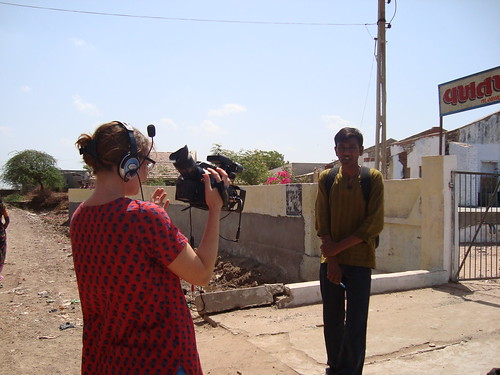 I volunteered with VV for three months this year, February to April, primarily videotaping VV's work in Goa, Maharashtra, and Gujarat. I witnessed first-hand VV's innovative training models, in particular the Community Video Units, and also saw the stirrings of new programs. In May, after I returned to the United States, I interviewed Jessica about the state of VV in 2009.

Morgan: I'm thinking back about an interesting conversation you had with Bergen (Bergen Moore, a VV volunteer). He'd been hanging out in the VV office for a few days, but he still seemed unclear about what exactly VV does. How do you break VV down to people who are still trying to get it?

Jessica: So what we're trying to figure out is how communities can have a media of, by, and for that community. We are constantly trying to figure out, how can we have a thriving media industry in slums and villages? It doesn't mean we think we can build a CNN. It does mean that we think any village or slum, because of cheap technology today, can have their own local media system. So when they need information, when they need something covered, they have a local beat reporter. Right now they don't. Right now media in a country like India covers extremely middle class issues that effect ten percent of the population, if that.

It's a long journey. But we're trying out different models to create media at this really local level. So for instance, our first model asked, can volunteers create a model where media is produced quickly and inexpensively, for $100 per video, using donated equipment and volunteers? That was our first model in 2004 and 2005, to create a scalable, extremely low cost model for NGOs. Now we're experimenting with CVUs. It's all over our website, but that's basically what happens when you invest in creating local media systems at a high level, for years, and a community owns that unit. You can go back to that community and measure the success. But they're more expensive. We did the math once and it would be a billion dollars to create CVUs for the billion people in the world living on less than $2 a day.

But what we need to figure out is, if you need $200 a month a month to live in a slum, and video equipment costs $2000, that's $4400 a year. Can we figure out a way that a slum person can make $4400 a year making video? That's the thing we need to crack. To give a woman $5000 a year to sustain herself and her own little business. I think it's possible, because it means selling 4-5 videos a year at $1000 each, which is competitive. And as a career option it would be attractive in slums. It's attractive because it becomes one of the only jobs in slums where people are using their creativity and being paid for their minds, for the way they talk and the way they think. Can we train people to have the skills so that they earn this basic amount? We'll try to figure that out right now in Brazil. 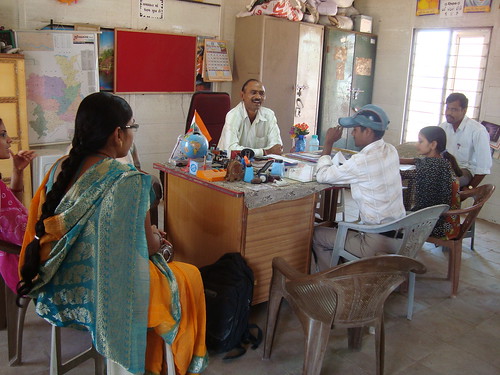 M: What is the new Brazil project?

J:We have a grant to start a new program in Brazil called VCU.br. We will give fellowships to ten young people from Favelas that already know how to produce video from taking a two-month NGO program. But when these young people took those other courses, they weren't able to earn a livelihood because these were short term programs. We'll work with them for a year to develop individual business plans. We'll have to decide, do they just do social media, or is this video purely as a livelihood, and they'd take corporate clients? We want there to be a human rights framework.  I think you can reconcile the market and the human rights perspective through certain groups who buy content, like Current and MTV Iggy where we just did a project. Brazilian culture has an international currency, so we'd find a line between the kinds of issues that give people a voice, and the market. That may not be possible. We might find that the only job available to a videographer from a slum is as a runner on a set, or working as a camera person at a news station.

J: Not really. Our Community Producers are very explicit that their purpose isn't to just record stories but is also about giving you information and helping you do something, encouraging you to do something with that information. it has a strong activist element to it.

We also keep coming back to this thing: media that is of, for and by communities. There are certain values that we have that shape our work: that voice is a human right, everyone has a right to a voice. Traditional media systems do not make way for the voice of poor people, in any country. What is the demographic of a reporter? In India the demographic of a news reporter is middle class, urban, english speaking. In America, where most people are middle class, it's more okay, the media is reflecting middle class interests. But in India you have a middle class media in a country of slums. That's where we need to bring in community voices, people who are left out of traditional journalistic system. 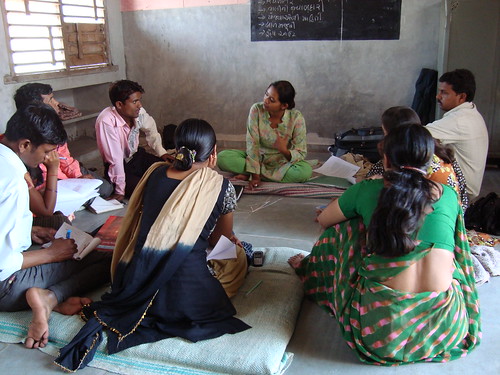 M: We also talked about the importance of the local. To really define community media, i think people have to understand this idea that local news is something we should expect and honor in a democracy. It's how people can defend themselves from propaganda, it's how people know who to contact about basic amenities or problems in their area. It's how ordinary people can confront the powerful.

J: Think about how many human rights violations there are in India and instances of corruption. There are dozens that happen in a village of 3000 people. In how many of those occasions do people know what to do about it? That's where local information is important. There was an instance in one of our CVU areas where people in a few villages were not getting paid minimum wage, so producers made a video about minimum wage. We went back later and found now the villagers are getting minimum wage after they learned in a video what the minimum wage was. And they demanded they be paid properly. In this case the landlord said, 'We didn't know, ok, we'll pay you right now.' They were willing to correct it. That's an example of the basic power of information. What's the point of democracy if people don't know what their rights are and how to assert them?

M: I think it's critical for people who aren't from India or other developing countries to understand that people in India don't really have a 'local news' for their neighborhoods. and they don't have public access channels either. And everyone's family doesn't have a handicam. Seeing yourself on a screen is rare and exceptional.

J: I have no idea what it would be like to do CVU's in America. There's a kind of charm and appeal to this kind of process in India. We can do a survey about the CVUs that are 20 km outside of major cities like Ahmedabad that have multiplex theaters. You ask villagers, Have you ever seen a screen this big? and everyone will say no. No one's ever gone to a theater. And here they are watching their own image projected at 20 feet high on a screen. It's amazingly novel and empowering. You can't really wrestle with that in America.

M: I guess the equivalent in America, where you've got higher literacy and computer access, but often lousy local reporting, are neighborhood blogs. Video Volunteers seems like the Indian answer to that.

J: Yes, i think community video is like a developing world equivalent of blogging, appropriate for places with high levels of illiteracy.

Morgan and Jessica in Goa

Posted by Morgan Currie, a documentary producer who is currently receiving a Masters in New Media at the University of Amsterdam.

Impact Story
Change: One Conversation At A TimeAll VideosOld Impact