NextMaking it Happen Locally: interview with Jessica Mayberry
Impact in your inbox!
Get updates from India's largest community media network

Cycle of Empowerment: an Interview with Stalin K on community participation 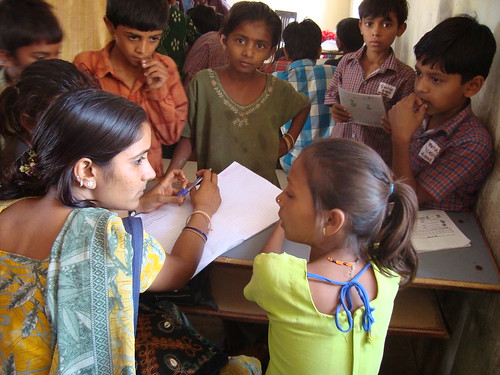 VV's videos are really all about encouraging audiences to step up to local challenges, whether they give the postal address of corrupt officials, show how you can access microcredit, or tell you your right to medical care.

But how can you know if anyone will actually do anything the day after a screening? What's the point of the video if it doesn't make change? VV tackles this critical issue by training CVU's to gather local volunteers who act as stewards of their videos' messages. I asked Stalin to describe how this process worked at the latest Community Participation workshop he conducted with CVU Apnaa Malak Ma in rural Gujarat.

Morgan: Where have you been?

Stalin: I just came back from Gujarat, a western state of India, after visiting two of our units. One is in the city of Ahmedabad, called Samvad, which means 'dialogue,' and the other unit is in rural Gujarat called Apna Malak Ma, which means 'in our land.'

At Apnaa Malak Ma I conducted a two day workshop on helping them figure out how to increase community participation. The unit suggested they'd work with a women's committee and a children's committee in the villages, to involve them in publicity for screenings as well as following up on call-to-actions at the end of each magazine.

I conducted a trial workshop with a set of women in one village, and another set of children in another village, where community producers and coordinators observed how I conducted meetings. Then we came back to the unit's office and drew points about how to conduct such meetings again.

For example, after the end of the workshop with the women in one village, we formed a women's committee. So 54 women gathered, and 16 gave their names to be a part of the women's committee for that village. I asked all women from that village to get up, come to the front side, and clapped and thanked them for taking on this charge. Now, based on that learning, Apna Malak Ma will go about setting up eight such [women's] committees.

M: What do these committees do?

S: The committees will help the CVU get attending at their screenings. They will also play a strong role in following up the call-to-actions at the end of a magazine. For instance if a magazine says to solve our issue on a problem, say, on domestic violence, and you need to contact such and such NGO or state department, we need community members to keep an eye out and monitor, are people actually doing these cases? These committees will be the first point-of-contact for these villages.

M: Can you give more specifics about how the women will carry out their monitoring? What does being a point-of-contact look like in action?

S: On the day of the screening, community producers would first meet these women who would then help them gather audiences in the village. Some of the women would go door-to-door and encourage others, specially women, to come for the screening.

Once the screening is over, the AMM team would introduce the committee members to the whole village and tell them that they could contact these women for any guidance they may need in taking the action. The following days, members of this committee would go around the village and ensure that the action is taken.

In one village the women’s committee was successful in getting a nearby hotel to shut down its polluting toilets. The hotel was letting out all the refuse from its toilets to the nearby field, and during monsoon the water would run off from the fields to the lake, completely polluting the water. The women’s committee, after seeing a film, took on the hotel owners who had to succumb to the pressure and re-make proper toilets.

The idea with committee is that not just CVUs, but that these women will eventually be the leaders of that village. They are expected to take on all the key issues of the village, irrespective of whether the CVU has made a film on it or not.

M: Was it not possible to get a co-ed committee?

S: The reason why we zeroed in on women's committee is that if you look at the attending at the screenings at night, the number of women is lower, they're usually at the house. if women encourage other women to go, the number attending will go up. The other reason is the issues addressed by the magazines are community issues, and it usually affects women, bc they run the families, they face the first brunt. So it's important for women to know how to solve these issues.

Children are from both genders. We thought of a children's committee because there's an equal number of children and adults at the screenings. Children are always there to cheer and sit in the front row. The idea is to sit with them and figure out what issues they want to see in the magazines, and because they are always behind the distributor advertising these screenings, maybe they can help and can have more fun with it, and they're very enthusiastic.

M: So this shows how VV is effectively getting community participation and action beyond the screenings.

I would break up our work into three different phases. One is to find out issues and figure out how to solve these, through preproduction and research. The second phase is to present the issue and the solution - production and screening we call it. You make it, you put it in a form you can understand, you inspire people by putting presenting it in success stories. The third and most crucial phase is to have a discussion on how to solve thes issues, what steps can be done. If the third part is not done, the idea of community video is lost.

We're empowering people not just to voice their problems, but to have solutions. Unless the solution is acted upon, tested, tried, and we know if it works or not, we're not completing the cycle of empowerment. For us the fact that the presentation or voicing their problems is not enough. Unless they lead to concrete solutions, communities themselves taking steps, it's an incomplete process.

M: Is this the first time you've formed these committees?

S: No. AMM has already formed four women's committees. This is the second time around. The children committee was formed for first time. In other cases, no other unit has formed such dedicated committees. Most units have volunteers that help them set up screenings and fill out feedback forms.

Commemorating soldiers of The Indian National Army in Betul

In this video, our community correspondent Mohanlal Sheelu is participating in a program commemorating the ex-soldiers of INA. From the Ghoradongri block of Betul District, Madhya Pradesh, around 200 people had joined the Indian National Army.

Residents of Bansajhal Panchayat are facing problems to get clean drinking water, authorities kindly help them @wrd_cg A #GroundReport from #Surguja #Chattisgarh youtube.com/watch?v=SAeQ6q…